Since the earliest days of IF, players have distributed solutions to well-known stories, to help out other players at their wits' ends. The commonest format for these is a list of commands to type, sometimes with notes in the margin, and such a solution is called a "walkthrough", since it walks a player through the story.

Few authors publish solutions of their own works, but many supply their testers with solutions, especially towards the end of testing, or submit a solution as part of a competition entry. To help with this, Inform can generate such a walkthrough solution automatically:

Release along with a solution.

Inform will then place a file called "solution.txt" inside the "Release" folder. The solution might look like so (although probably much longer):

Solution to "Memoirs of India" by Graham Nelson

Branch (2)
INVENTORY ... Always a good idea
GIVE MANUSCRIPT TO THOMAS

Inform does not, of course, know how to solve IF all by itself, but derives the solution from the project's Skein. Since the Skein will have been used in testing the story, it will very likely contain a perfect solution - or several different ones, taking the story to a variety of possible endings. In the example above, there are two possible winning lines, which diverge right from the first move. (There can be further divergences: for instance, if branch (2) splits, it will split into branches called (2.1), (2.2), (2.3) and so on.)

But the Skein will also contain plenty of unwanted diversions, so Inform does not rewrite the entire Skein as a solution. Instead, it looks for knots in the Skein which have been annotated. Any knot whose annotation begins "***" (three asterisks) is considered to be a final, winning move. (It is probably a good idea to lock such a knot once it has been annotated thus, too.) We can mark any number of knots "***" since, after all, we can declare any number of lines of play as possible solutions. Inform then constructs the solution out of all lines of play in the Skein which lead to "***" endings, and ignores other threads. 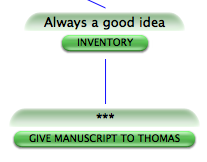 Annotations other than "***" in the Skein are turned automatically into comments in the solution text. For instance, the knot for the INVENTORY command in the second branch above was annotated "Always a good idea", and this was transcribed into the solution. (If an ending knot is annotated with, say, "*** Happy ending!" then the "***" marks it as an ending, and "Happy ending!" is added as an annotation to that ending.)

By default, the solution text is not linked from our webpage, on the assumption that we may want to generate a walkthrough but not immediately advertise it to players. If we wish to change this, we may write instead

Release along with a public solution.

The terms public and private may also be applied to other elements we are having Inform generate to include on our webpage: see also the notes on private source text, below.